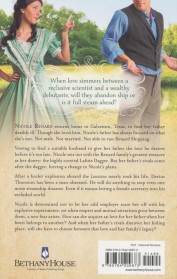 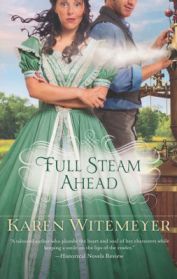 “Full Steam Ahead” is the perfect book for those who love heroes and heroines that don’t necessarily fit the mold. Nicole Renard is deeply devoted to her father, but their relationship is strained due to one problem totally out of her control – she’s not male. Smart as a whip, and full of spunk, this heroine will capture your heart from the first page.

At the beginning of this story, Nicole has returned home because her father is deathly ill … and his business competitors know it. Attempts are made by his competitors to end her father’s business legacy, and Nicole is desperate to find a husband to give her father a male heir, and help hide what she thinks is her father’s greatest treasure – the Lafitte Dagger. (Yes, there is pirate lore in here too; a unique twist!)

During her adventurous journey to find a spouse among her father’s business partners, she bumps into a very unlikely spousal candidate – Darius Thornton. Darius is a man whose life has become totally obsessed with one thing – improving steamship boiler safety. His explosive experiments, and driven focus, have the entire town talking. Everyone avoids even being near his home except for a couple of loyal house staff members.

These two characters, on the surface, do not seem made for one another at all.  However, once Nicole begins applying her keen mind to Darius’s boiler experiments … he can’t help noticing Nicole is more than a pretty exterior; something her father has failed to do.

I would say that this story is written more with female readers in mind, but anyone interested in the history of US steamboats would enjoy this journey back to that era of travel.

I will state for the record, that Bethany House covers tend to be among my favorites. Their design and photography teams manage to capture the buyer’s attention, as well as the heart of the author’s story on a very consistent basis.

The expression of the female model, her body-language of arms folded about her mid-drift, her fly-away hair, and the blast of steam coming from the boiler the male model appears to be working on, all combine into one intriguing and rather fun cover. You know from the moment you look at this cover model, that this young woman is determined, and more than a little spunky.

On the front cover, we only catch a glimpse of the chin of our hero’s face, but he does look rather hunky. You already wonder what he’s up to with all of that steam?

The spine features the same photo as the cover, only we do get to see the hero’s entire face (still hunky). The spunky theme is also cleverly carried into the back cover design, where our heroine model appears to be giving her hero an “I told you that wouldn’t work” speech, with one hand on her hip and the other pointing a finger in a commanding way. The hero has his arms slouched, palms up, as though conceding she is correct, or admitting he didn’t know something. I love that I can guess what their conversation is, and what they personalities are like by their body language. So often a cover is only a face staring into the distance.

This cover definitely draws you into the characters and into the story from first glance. Well done!

*This book was provided by the publisher for review under no guarantee of a positive review.