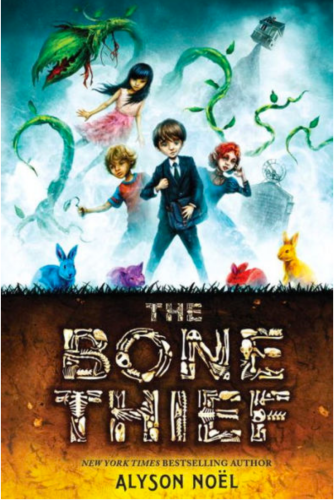 “The Bone Thief” is a young adult, general market fiction novel. It is set in a fantastical world, where the only thing normal is that everything is always weird – well, everything except for the novel’s main character, Grimsley Summerfield, who is a seemingly average boy for having lived in such an unusual atmosphere all of his life.

The book deals with typical tween/teen issues of insecurity and the desire to fit in, as well as stronger topics such as bullying by both peers and those in authority. What I enjoyed was that this novel handles these topics in a way that is driven by the plot of our young hero’s journey and that of his unusual friends – both old and new.  The message of the story comes about very organically and not in a forced way. The book is not what I would categorize as a Christian novel, yet the theme of light triumphing over darkness is still definitely present.

I would recommend this book to readers primarily age 11-14. It features shorter chapters, strange characters, intriguing mystery, and a lot of action to keep them turning pages.

This cover was full of such whimsical imagination. As a life long lover of mysteries and fairy tales the misty vines, odd colored rabbits, and text made creatively out of bones had me guessing as to what kind of story this could be … from the very first glance.

Even the choice of font used to display the author’s name is no accident. It’s first impression is one of creative, rule-breaking mischief. A trait not unlike the personality of the main character.

The bone text is quite frankly a bit creepy, but paired with the fairy-tale like top half of the cover we are reassured that this novel won’t be one of complete gore. Although there is darkness in the novel, it is just enough to let the light shine through by contrast.

Please note: I checked this book out of my local library simply because the cover caught my eye, and the marketing copy on the inside jacket confirmed that it should be everything the cover design promised.

Book Review
Other than reading the Harry Potter series a few years ago I have to admit that I haven’t been reading a lot of what would be considered YA (Young Adult) fiction for several years. Because of this, the immediate angst of the teenage protagonist, Julien Losier, in How Huge the Night: A Novel

was a little jolting at first. However, within a few pages I found myself able to see beyond the angst – to understand the triggers that were setting it off, and felt myself being swept easily into this young man’s world.

There are actually several teenagers featured in this book, some of them facing the typical struggles all teens face, but all of them additionally facing the hardships of a war-torn country filled with pockets of racial hatred and loyalty suspicions. I enjoyed this story a great deal, and would recommend it be given to any teen you love. Especially if they have any curiously about what it was like to be a teen in another time and place. As an adult I still found this book to be very engaging. The authors definitely did their homework about the time period, and the stories seemed at times all too real. This book would make a great addition to home studies about WWII for teen students.

Cover Review
I think that the dark and foreboding image of the aging bridge in an approaching storm on a moonlit night is … a great start. Unfortunately, by the cover alone, at first glance I can tell nothing of what the actual story is about. I would have no idea it was YA, no idea it was a WWII novel, no idea it was about a French village helping Jewish refugees … I would only know that it appeared to be dark, a bit creepy, and in an older, probably Europeon village.

I was attracted to this story by the back cover copy. The copywriter has done an admirable job of matching the tone of the story within and writing intriguing text to pull a reader in. Though this cover photo is interesting … I don’t think the cover will quite grab the attention of the intended audience unless they read the text. Without reading the text, however, … I’d imagine this would get picked up for review by those seeking a supernatural or horror novel rather than a WWII YA historical.

* This book was provided for review by the Christian Fiction Blog Alliance (CFBA). Additional resources for the book, provided by the CFBA, can be found below.

This week, the  Christian Fiction Blog Alliance  is introducing  How Huge the Night  Kregel Publications (March 9, 2011)  by  Heather Munn and Lydia Munn

Heather Munn was born in Northern Ireland of American parents and grew up in the south of France. She decided to be a writer at the age of five when her mother read Laura Ingalls Wilder’s books aloud, but worried that she couldn’t write about her childhood since she didn’t remember it. When she was young, her favorite time of day was after supper when the family would gather and her father would read a chapter from a novel. Heather went to French school until her teens, and grew up hearing the story of Le Chambonsur-Lignon, only an hour’s drive away. She now lives in rural Illinois with her husband, Paul, where they offer free spiritual retreats to people coming out of homelessness and addiction. She enjoys wandering in the woods, gardening, writing, and splitting wood.

Lydia Munn was homeschooled for five years because there was no school where her family served as missionaries in the savannahs of northern Brazil. There was no public library either, but Lydia read every book she could get her hands on. This led naturally to her choice of an English major at Wheaton College. Her original plan to teach high school English gradually transitioned into a lifelong love of teaching the Bible to both adults and young people as a missionary in France. She and her husband, Jim, have two children: their son, Robin, and their daughter, Heather.

Fifteen-year-old Julien Losier just wants to fit in. But after his family moves to a small village in central France in hopes of outrunning the Nazis, he is suddenly faced with bigger challenges than the taunting of local teens.

Nina Krenkel left her country to obey her father’s dying command: Take your brother and leave Austria. Burn your papers. Tell no one you are Jews. Alone and on the run, she arrives in Tanieux, France, dangerously ill and in despair.

Thrown together by the chaos of war, Julien begins to feel the terrible weight of the looming conflict and Nina fights to survive. As France falls to the Nazis, Julien struggles with doing what is right, even if it is not enough-and wonders whether or not he really can save Nina from almost certain death.

Based on the true story of the town of Le Chambon-the only French town honored by Israel for rescuing Jews from the Holocaust-How Huge the Night is a compelling, coming-of-age drama that will keep teens turning the pages as it teaches them about a fascinating period of history and inspires them to think more
deeply about their everyday choices.

“The Munns have written an engrossing historical novel that is faithful to the actual events of World War II in western Europe during the tumultuous year 1940. But How Huge the Night is more than good history; it is particularly refreshing because the reader sees the conflict through the lives of teenagers who are forced to grapple with their honest questions about the existence and goodness of God in the midst of community, family, and ethnic tensions in war-ravaged France.”—Lyle W. Dorsett, Billy Graham Professor of Evangelism, Beeson Divinity School, Samford University

“Seldom have the horrors of war upon adolescents—or the heroism of which they are capable—been so clearly portrayed. I loved this coming-of-age story.”—Patricia Sprinkle, author of Hold Up the Sky

“The book expertly weaves together the lives of its characters at a frightening moment in conflicted times. As we read of their moral dilemmas and of their choices, we too wonder, Would I do has these in the story have done?”—Karen Mains, Director, Hungry Souls

If you would like to read an excerpt from How Huge the Night, go HERE